Serendipity Has a Price

September 20, 2016
Once we arrived in Dublin, we knew there was one day trip we should try to make: to the UNESCO World Heritage site of Newgrange, the 5000 year old Neolithic ritual center and passage site. The easiest way to get there was via tour group and I'd done some research and discovered Mary Gibbons. The reviews said she was an excellent guide and very engaging, which sounded perfect.

We aimed to do this tour next week but she was fully booked when I enquired on Friday night. However, in a matter of a few moments, we learned she had a cancellation for Saturday, so we grabbed it.
The pickup spot was about 25 minutes away at the Doubletree. We hoofed it down there and made it by 7:45 a.m.
First of all, it was a big tour bus, so John started getting hives immediately. (And muttering one-liners even before the main group of our compatriots joined us.) Once everyone got loaded onto the bus, including the Filipino family who held us up and the Italian girls who were late getting on the bus all day AT EVERY SINGLE STOP we got going to Newgrange. Mary, as promised, was an excellent narrator of the sights we were passing and Pat was a good driver.
She didn't stop talking for the 40 minute drive to the site. Fortunately, she had a lovely, melodic voice and I was very interested in her stories, the history she relayed, and her preparation for our visit to the site. But all I could think of was what if she was terrible? Boring? We would have been hostages for the day. 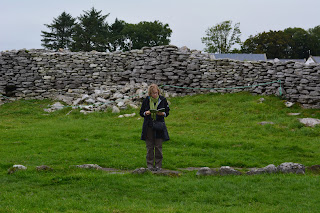 She turned us loose at Newgrange for a few hours and the site was as promised. We were able to walk into the passage in a small group and stay in that place for 10 minutes or so. Our guide demonstrated the effect of the sunlight's rays during the winter solstice through the entryway and how the light flowed through the passage and flooded in the shape of a cross. 5,000 years ago. The engineering to build the site was incredible and you could see it clearly from the inside. Outside, it just looked like a mound.


This part of the day illuminated the downsides of a coach tour...the people who won't shut up and the crazies. We had one of each. Woman who wouldn't shut up WORE SLIPPERS. Sometimes it's just humiliating to be an American. (We found out later that she and her husband own an insurance business of all things.) Crazy lady wore multi-color leggings and was from New York. Who could have guessed?  For a while she glommed onto us and it was painful. The sound of her voice could shred paper.
After our standard lunch of soup and tea in the tea room, we reboarded the bus and drove through the Boyne Valley on our way to Tara (no, not that one). This site, high on a hill, is the site where 142 high kings of Ireland were crowned. We were there on a glorious day, so we were able to see 23 of Ireland's 32 counties.


Ms. Crazy and Ms. Won't Shut Up got worse. Ears started to bleed. Reasons we can't do tour buses kept cropping up. Overall, Mary was great. Newgrange was incredible and Tara very interesting.
However, the other people on the tour reminded us why we are antisocial and, for now, not tour bus kind of people.​ 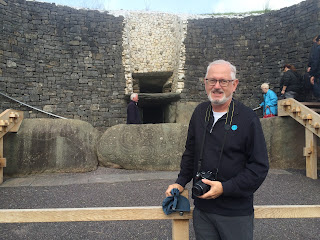