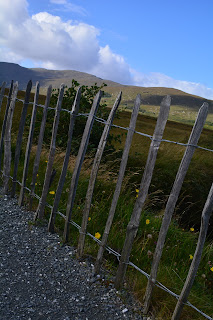 This trip to John's homeland has made for some interesting people watching. We've seen hints, or had downright eerie encounters with people who resemble (some very strongly) his family members.


It's so interesting that three generations removed from this small island, tue strong family resemblances of the Boyles, McCanns, and Cavanaghs. His grandfather Tom, his Uncle John, his father Bernie at the pub in Westport, a younger version of Marion, and her siblings. I saw John's brother Tim on Sunday, walking out of a shop on Duke Street. ​We've also seen all three of the O'Shea cousins.


And today's the lunch at Hugo's, we sat next to my old friend John Clarke, gone now gone from this world over 5 years ago way too soon. John, who reveled in his Irish ancestry, sat with me many evenings over thirty years ago at the Irish pub on College Avenue in North Oakland and introduced me to Harp Lager with a splash of Roses Lime. Today, it was that same tanned young man, wearing a navy suit, who read the newspaper closely as he ate his lunch. His nervous foot still twitched.
Ireland Travel