September 18, 2016
Thursday was gray, so we decided to make our way directly back to the airport to return our car. In some ways, John was in heaven because after the first 45 minutes of our trip, we hit the M6. He wasn't quite sure to do with all that space! And the speed! Our little Scoda Citgo almost burst its pistons to keep up with the 120 km speed limit. The trade-off, however, was boredom. Freeways or motorways or autostradas or whatever you call them are boring compared with the smaller roads. No scenery to speak of. No quaint villages. Oh well.

The business at the airport went very smoothly and we found the queue for the Aircoach in all the madness. A two day strike of,the bus drivers had begun and so there were no traditional bus services either Thursday or Friday. Thank gosh Aircoach was running! Eight euros to the Donneybrook stop and we were close. A short walk to 47 St Ann's, Ailesbury and we were there. Navigating the intersection was tricky, but we lived to tell the tale.

We spent the rest of Thursday exploring the neighborhood around the flat--there are lots of shops and markets to outfit the kitchen for breakfast and simple dinners.  And, a rainbow from the living room window, just for us. 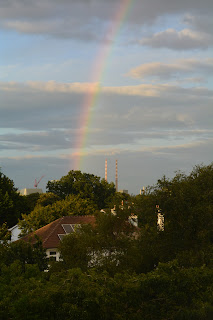