We decided to schedule one specific "experience" when we were here and it wasn't the typical one. No fishing expedition cycling tour, or boating trip. And especially no trips to Game of Thrones sites or the isle of Skellig Michael (the final scene of Star Wars). Instead we went on a "hawk walk." 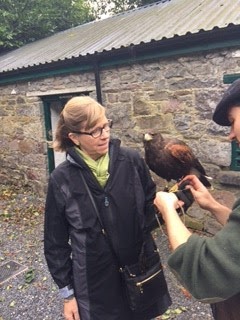 We picked the Ireland S​chool of Falconry at Ashford Castle and scheduled an extended walk, which included a private walk with a guide for an hour and a half. The castle itself is quite a setting, just outside the village of Cong in County Mayo. Yes, it is a castle...a place that Americans spend, at minimum $700 per night to say they stayed in a castle. I can spend money very easily (e.g., business class plane tickets) but I had no interest in staying at the castle with a bunch of obnoxious Americans. But we got to visit the grounds to access the school of falconry, so win for us!

The school is set at the corner of the estate, in what appeared fort-like with high walls and doors. We met Alec, our young guide, and he introduced us to the two Harris Hawks we would be managing (with his help). We were fitted with heavy leather gloves, given our orientation, and introduced to Rua (me) and Kara (John). Alec helped us fly both females for the next hour as we walked through the woods around the estate and it was so interesting! They are motivated by food, so they would fly from our hands and then we would lure them back with baby chicken parts hidden in our gloves (yum!).

They swooped away and came back many times, sometimes switching to whoever's hand seemed to have better food. It wasn't the least bit frightening, even when they would come in for a fast landing. Once we finished flying the Hawks, we were able to fly Dingle, the woodland owl, in a large open space, for comparison. He was much bigger and more powerful.

Overall, it was such an exhilarating experience! So interesting to learn about the Hawks and this ancient sport.
Ireland Travel