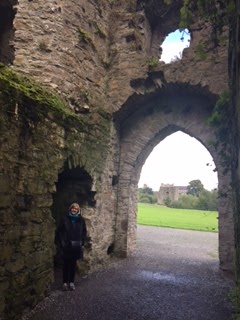 After a few days traveling to and through the West of Ireland, I've noticed a few things, some completely obvious and some which may not be quite so easy to guess by an armchair traveler.

First, the stereotype is true: so far, the Irish people we have met have been warm, friendly, and funny. This observation includes hotel staff, who are paid to be nice; restaurant owners, who make it their business to be helpful and cheery; and even teenage workers at gas stations (go figure) who generally could typically care less. Lots of smiles all around, even on a day like today, with gale force winds.

Second, although I've been a passenger so far, it's my view that the Irish roads are better marked than the English or Scottish ones. Except for the narrowest lanes, they have center lines and bright yellow lines delineating the edges of the road. My driver (!!) tells me these markings make it much easier to figure out where you are, especially on the narrower rural roads. You can tell when you're "encroaching" into the other lane.

Third, the homemade foods we've eaten so far--jams, breads, desserts, soups, etc.--are just delicious. They have flavor! The jams taste of ripe fruit, not sugar and pectin. The soups, so far, are well seasoned but highlight the ingredient used (beans one day, vegetables another). And brown bread, which seems to be a national staple, ranges from good to just incredible. So far, the only white bread we've eaten is toast at breakfast.

Finally, I'd forgotten what it's like to be in a country with 6-8 television channels and the same number of radio channels (2 Irish, 1 Gaelic, a few BBC and Sky News). The first day was a bit shocking! Where are my 50 choices? The truth is, I should be reading anyway...
Ireland Travel