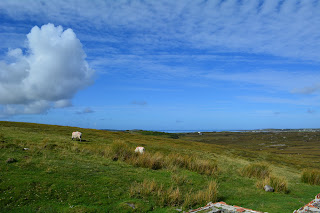 We knew how lucky we were on Tuesday when the weather cleared and we had an incredible, sunny day. We could feel how the staff in our hotel responded, and we could feel how happy people were, walking along, their faces turned towards the sun. Apparently they've had a terrible summer and have been hoping for a better September and October.


We started the day with a plan and it changed--the best part of being flexible. Our first stop was at the site with two claims to fame: 1) it was the site of Marconi's wireless transmitting station to Nova Scotia (1910-1918 or so); and 2) the two men who completed a transatlantic flight in an airplane (Adcock and Brown) crash landed their plan very near this station, in the bog! They completed their flight 11 years before Lindbergh, and their names are plastered over lots of things in Connemara.
We thought we'd be here a short while (how long does it take to read a few markers, right?) But it turned out that the site is very large, laid out over the moorland, so we decided to walk the route. We had the 2 mile trail to ourselves, all land and sea and mountains (all the Bens!) and sheep wandering along our trail.
It was a great walk, and much more peaceful than the other trails we had considered taking, especially since we're anti-social.

After a pub lunch in Clifden (where every seat in the sun was taken), we took a scenic drive along very narrow roads...John loved our tiny car!