September 11, 2016
We just spent two nights at Harvey's Point, a wonderful Irish country hotel. It was in a lovely location on Lough Eske and we used it as a base to tour County Donegal and the Wild Atlantic Way. The entire area was gorgeous and not terribly touristy, which we loved.


We headed south to Westport today and the wind picked up and reached what I would call gale force by noon. Thank gosh we had a small car! It had to be blowing steadily at 45-50 mph and gusting higher. We hugged the North Atlantic and stopped at the Carrowmore megalithic site.

I still can't get over how people 3500 to 4500 years ago moved these stones into position from wherever they got them. Lots of levers, I assume. They were placed as part of burial rituals, or so the archeologists tell us.​ 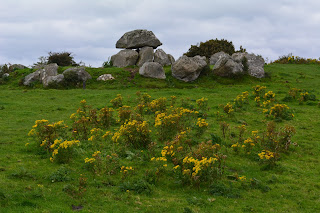 We'd planned to visit another similar site, but the wind and threat of rain was just crazy, so we adjusted and visited the National Museum of Country Life instead. Two important things: this place had a tea room (!!!) and it was an indoor activity.


I love tea rooms! I forget how much I love afternoon tea, with milk. Today we needed real food, not a sweet. The tea room was quiet at 3 pm so we enjoyed our tea and soup in peace. Then, we wandered around this relatively new museum. It's hard to realize that Ireland only became a Republic in 1922, so it began gathering folk history so much later than other countries, including ours. This museum was very interesting and told, through objects (mostly donated by families all over the country) and personal stories, how country people lived, mostly after the great famine. Totally worth the stop.
Ireland Travel